Experience one of the greatest achievements of the ancient world 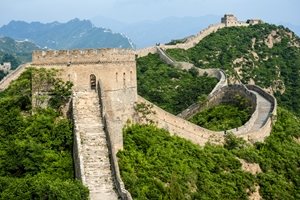 The Asia travel destination of China is home to one of the most famous and well-recognized structures ever created by human hands. The Great Wall of China, standing for millennia as a symbol of the strength and dedication of the Chinese people, is truly a marvel to behold. The wall is so large and spans such a great distance that it can be viewed from space, making it a beacon to travelers both foreign and extraterrestrial alike.

According to Travel China Guide, the term "Great Wall" is something of a misnomer, as it is not technically one wall, but a series of smaller walls that have been connected and interwoven. The project was the brainchild of Emperor Qin Shi Huang, who conceived the idea in the third century B.C.E. after he created the first unified kingdom in China's history. Intended as a way to unify the newly created kingdom as well as to keep out invaders, construction on the Great Wall continued for more than a millennium after its inception. History.com stated that the most extensive and famous period of construction is attributed to the Ming dynasty, taking place between the 14th and 17th centuries C.E.

An official UNESCO World Heritage Site, the Great Wall stands today as the most prominent symbol of the culture and dedication of the Chinese people.

A tour of the Great Wall

With the Great Wall spanning a mind-boggling 5,500 miles - that's almost 9,000 kilometers - seeing it in its entirety would be impossible. The Wall is divided across several provinces, and determining what you want to experience will help you plan your sojourn. According to Travel China Guide, the most famous section is conveniently located in Beijing. As the capital of the country and a major urban center, it's a great place for many travelers to start.

While many sections of the wall have been updated over the ensuing centuries, the Simatai and Gubeikou sections are kept in a state much closer to their original construction. This provides visitors with a unique piece of the ancient architectural ingenuity still preserved today. The Badaling is one of the most recognized sections of the Wall - if you've seen the Great Wall in movies, books or magazines, chances are it was from this part. Though Travel China Guide recommended visiting this particular segment during the offseason, as it can be a major draw for tourists and gets crowded very easily.