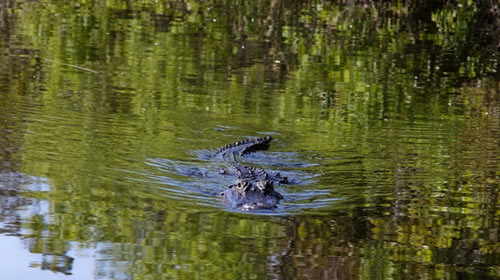 Everglades National Park in southern Florida is one of the most recognizable U.S. travel destinations and wildlife habitats. It's so iconic that the idea of it ever being in danger wouldn't cross most people's minds, but according to researchers, the site may be at risk. This important ecosystem is home to a wealth of animals and plants, and it's worth exploring while it still represents the haven of biodiversity that it does today.

In 2014, the U.S. Fish and Wildlife Service announced the introduction of two new species and a large tract of land to the endangered list. The Florida leafwing and Bartram's scrub-hairstreak butterflies have been officially listed as endangered species, necessitating the protection of their habitat, which largely lies within the Everglades. Both species are native to the pine rocklands of southern Florida, which have been steadily receding with the human development of the state. The leafwing in particular has faced the destruction of its home, now living only in the Everglades. Roughly 10,000 acres of land has been set aside for each of the butterflies.

Even the park itself has been listed as endangered. In 1993, Everglades National Park was added to UNESCO's World Heritage in Danger list after it suffered damage from Hurricane Andrew. Conservation efforts succeeded in removing the park from the list in 2007, but its reprieve was short-lived. In 2010, the park was again listed by UNESCO due to the continuing decline of its ecosystem.

Unlike many endangered habitats, Everglades National Park is largely being degraded not by people, but by the weather. Storms such as Hurricane Andrew can disrupt the flow of water throughout the marsh, uproot plants and damage animals' homes. Visitors are still encouraged at the park, however. With a bit of consideration, guests can enjoy the park without further damaging the habitat that it provides.

Boating is one popular activity in the Everglades, but it may be best for people with adventure travel experience. The waters of the Everglades are filled with many species of animals and plants that can be damaged by boats' propellers - and some of which may pose a danger to human visitors, according to the National Park Service. Seagrass, which forms the basis of the park's ecosystem, is highly susceptible to damage from unwary boaters. Only people with boating experience and a familiarity with the Everglades' waters should attempt to navigate the channels.

However, the park also offers education on how best to preserve its ecosystem and others. For more than 40 years, Everglades National Park has teamed up with teachers to provide educational programs that teach children about the importance of wildlife conservation and the specific characteristics of the park.

The Everglades can be explored by foot, for those who want to get the full experience of the habitat but would rather do so from drier land. Since the park is mostly marshland, visitors are likely to spend time wading, but even those who stay dry can catch a glimpse of the many creatures that call the park home. From birds and bats to manatees and alligators, the park's diversity of wildlife offers animals to suit practically any explorer.