Pulling into port: 5 must-sees on an Eastern Caribbean cruise 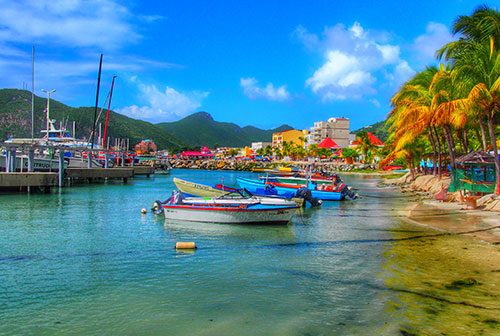 Approximately 22 million travelers worldwide cruise the Caribbean annually, per research from The Florida-Caribbean Cruise Association. Why? The Caribbean islands offer unbeatable attractions and experiences. This is particularly true of the Eastern Caribbean, where beautiful beaches and bustling boutiques reign supreme, according to Cruise Critic. Plus, this region is relatively easy for U.S. travelers to access, with many cruises departing from Miami or Ft. Lauderdale. If you are planning an Eastern Caribbean cruise, consider scheduling shore excursions on these popular islands:

The Netherlands and France share this popular Eastern Caribbean island, which hosts an estimated 1.8 million cruise passengers per year, according to researchers for the Department of Statistics of Sint Maarten. The Dutch oversee the southern portion via the capital of Philipsburg. Here, you can experience quaint Dutch architecture and even gawk at the massive jet liners that fly into Princess Juliana International Airport, whose runway borders the beach. Approximately 2.5 miles north of Philipsburg, Rainforest Adventures at the Rockland Estate offers the steepest zipline in the world, according to Travel+Leisure. The French portion of the island boasts world-class restaurants and pristine tropical beaches.

This remote British island is recognized internationally for its 33 white-sand beaches, per the Anguilla Tourist Board. These stunning shoreline features and Anguilla's laid-back charm make it the ideal destination for travelers who want an authentic and leisurely Caribbean experience. This may be one reason Anguilla often hosts celebrities, most of whom escape to the isle to avoid prying eyes, Vanity Fair reported. In addition to beaches and potential VIP sightings, you will also find great seafood, all of which is harvested locally and prepared in accordance with regional recipes. There are also plenty of European offerings available on Anguilla, including French bistro fare.

You will encounter rich history on the shores of Saint Kitts, which many call the Gibraltar of the West Indies due to its significance as colonial-era military outpost for the British and the French, according to Saint Kitts Tourism Authority. The island's most popular tourist attraction, Brimstone Hill, is an immense 17th century fortress and a UNESCO World Heritage Site. Saint Kitts also features an open-air train that circles the island, offering visitors unforgettable Caribbean scenes, and divers can explore nearby coral reefs and shipwrecks. Nevis lies southeast of Saint Kitts and is known for its natural features - Nevis Peak, an active volcano, rests at the core of the island, fueling the local hot springs, per Cruise Critic - and is reachable by ferry. The nearly circular island was also the birthplace of American statesman Alexander Hamilton.

This Eastern Caribbean island is among the 40 landmasses that form the Turks and Caicos archipelago. Grand Turk stands out as the political epicenter of the island chain, home to its capital city, Cockburn Town. Grand Turk, which has the second-largest population of the archipelago, is likely the first location Spanish explorer Christopher Columbus encountered when he made landfall in the New World. Grand Turk is an easy-going destination where there are more bikes than cars and the snorkeling spots are plentiful, Conde Nast Traveler reported.

Once an upper-class British sea station and longtime Hollywood home-away-from-home, Barbados has transformed into a care-free holiday spot for all, according to Conde Nast Traveler. The island rests on the eastern edge of the Caribbean, jutting out into the Atlantic Ocean. Bridgetown, its capital city, features Gothic revival-style parliament houses and a 17th century synagogue, along with restaurants that serve local cuisine and food from around the globe. Barbados is an ideal location for off-roading, which you can participate in by renting a four-wheel-drive-vehicle. It is also home to over 200 shipwrecked boats, which you can view while diving.

As you consider your potential Eastern Caribbean cruise, be sure to look into each of these locations and schedule shore excursions that will allow you to experience everything they have to offer.