Visit the ancient sites of Mexico 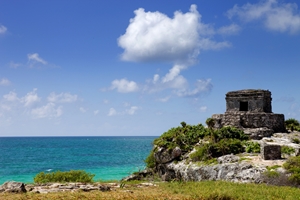 Mexico travel is famous largely thanks to the country's picturesque beaches and beautiful resorts, and while that's certainly an appealing reason to visit, the nation is also home to a rich sense of history. There are a large number of standing structures dating back to Mexico's pre-Hispanic time that provide a glimpse at the side of the country you rarely see on pamphlets. There are a few destinations in particular you should make a point to visit.

Dating as far back as 500 B.C., Monte Alban is located in the southernmost regions of Mexico, and is recognized as one of the most impressive structures from the pre-Colombian period. Experts believe that the site was an important part of the Zapotec civilization for an estimated 1,000 years. There are an estimated 1,200 monuments strewn throughout this ancient city, and its main plaza and the famous Stones of the Dancers stand out as highlights.

Located a short distance from Mexico City, Teotihuacan is arguably the most famous ancient structure in Mexico. This enormous Aztec site includes everything ranging from pyramids and murals to larger residential complexes. Despite having been established around 100 B.C., Teotihuacan is still relatively well preserved and is a popular tourist destination.

It's such a big complex that it can be difficult to know which structures to visit, but you should not leave Teotihuacan without stopping by the Pyramid of the Sun. At 738 feet across and approximately 246 feet high, this iconic building is truly a testament to the ingenuity of the ancient Aztec population.

It may not be as well preserved as some of the other archeological sites, but Templo Mayor is no less impressive. The temple is situated in Mexico City so it is particularly easy to get to, and aside from touring the ruins, a trip through the site's museum will prove to be an eye-opening experience into Aztec history. The museum, which was built in 1987, houses many of the most impressive artifacts that were found at the site. Objects range from the simple, such as knives and a rubber ball, to the more complex, like ornate masks and an elaborate monolith dedicated to the goddess Coyolxauhqui. Each relic will surely offer a glimpse into an ancient society you won't soon forget.