Pyramids of Giza are central to Egypt's tourism recovery 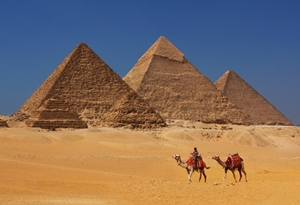 Egypt's mix of accessible ancient wonders and modern cities, such as Cairo, have long driven international tourists to the country. Ahram Online reported that tourism accounts for 11 percent of the country's annual gross domestic product.

However, the number of foreign visitors dropped sharply in 2011 during an uprising against the country's then-leader, Hosni Mubarak. According to the Egypt Independent, that wasn't the end of the bad news for Egypt's tourism economy. The news source reported that the number of travelers increased 17 percent and revenues grew 13 percent in 2012. Then in 2013, Egypt experienced its worst year for tourism. After the country's new leader, Mohammed Morsy, was overthrown, travel warnings were issued to keep visitors away. Tourism revenue fell more than 67 percent that year.

Despite the recent political turmoil, Egypt remains a unique Africa travel destination and its economy depends largely on visitors from overseas. The government has recently undertaken steps to show potential travelers that the country is still worth visiting.

One of the biggest new projects to revitalize Egypt's tourism industry is taking place at a site renowned the world over for millennia. According to the Ancient History Encyclopedia, the Great Pyramid of Giza is the oldest of the Seven Wonders of the Ancient World and the only ones that have survived to the modern day. When the situation in Cairo became too dangerous for most people to handle, tourism to the area slowed to a halt, but now that the area is once again stable, the tourism industry is being built back up around the country's capital and largest city.

In April of this year, Egyptian Prime Minister Ibrahim Mahlab started a three-phase plan to restore Giza and the rest of Egypt's historically significant sites to their former heights, The Cairo Post reported. Work on the first phase, which saw roads leading to the pyramids paved and lined with security cameras. The project's second phase is set to last until the end of July and will improve amenities for tourists. Some upgrades include the installation of public bathrooms and resting sites at tents outside the pyramids. The third phase will center on vendors and operators of other services that visitors rely on, such as horse and camel drivers. People who run these services will have to undergo background checks and acquire licenses before they can open for business.