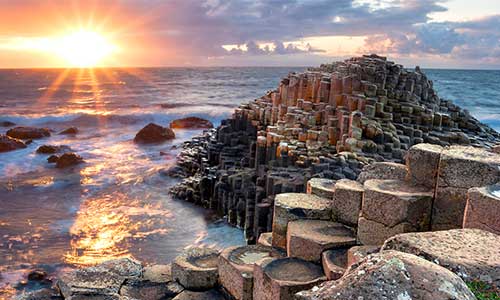 Whether it’s the chase for that pot of gold or simply a traditional meal of corned beef and cabbage – Ireland’s enchantment draws many new visitors each year. With rolling green hills covered in morning mist, it’s easy to appreciate the picturesque landscape that stretches out for miles. While Ireland is famous for its peaceful beauty, not all of Ireland’s treasures are well known. Here are some of the lesser known sights in Ireland that are well worth a visit in the future:

The Unsinkable Ship in Belfast

Do you love Leo, Kate, and the ‘unsinkable ship’? Well you’re in luck -- the iconic Titanic was built in Belfast and the city has taken this to heart. Visit the Titanic Belfast Building, which pays homage to the ship, crew and guests.  The building officially opened in 2012 and sits a mere 100 yards from where the Titanic’s hull was launched1.

Killary Harbour is Ireland’s only true fjord and stretches 10 miles in from the Atlantic. Surrounded by mountains, the views from Killary Harbour are magnificent. Killary Harbour offers fantastic scuba diving and regular boat trips around the fjord.

If you’re an adrenaline junkie you’ll want to check out the Slieve League cliffs in Donegal, Ireland.  With a height of 1,952 feet, Slieve League Mountain is known for its spectacular cliffs. If you’re brave (and experienced) enough you can try the One Man’s Pass trail where the path is only wide enough for one man to pass. Your reward will be well worth the risk as the views you encounter are amazing.

The Legends and Myths of the Giant’s Causeway

In Northern Ireland sit the estimated 40,000 hexagonal basalt columns that were formed during a volcanic eruption 60 million years ago2. The strange look of the columns combined with the mystical feel of the surrounding Irish landscape have led to many legends surrounding the Giant’s Causeway. One of the most popular is the legend of Finn MacCool. It’s said that Finn MacCool is an Irish giant who inadvertently created the causeway during an argument with a Scottish giant named Benandonner.