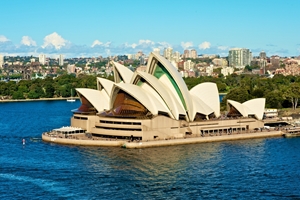 The Sydney Opera House is one of the greatest architectural achievements of the 20th century. The world famous building sits astride the Sydney Harbour, and is a major draw for tourists and travelers every year. This iconic landmark makes an impressive spectacle, whether you're taking in a show or simply admiring the building itself. While you're planning your Australia travel experience, take a few minutes to brush up on some of the building's history, which is as interesting as the hall itself.

You may recognize that the Sydney Opera House is a truly massive architectural undertaking, but you might not realize just how big it is. According to the Telegraph, the building occupies a site that is so enormous that eight Boeing 747 jets could park wing-to-wing. It's iconic roof sails, by far the venue's most recognizable feature, reaches 67-220 feet - above the ocean, the same height as a 22-story building. And it's not just big on the outside, either. All told, the building houses 1,000 rooms, including multiple concert halls, three restaurants and several cafes and bars.

The tradition of mammoth size is demonstrated by the Grand Organ in the venue's Concert Hall. With over 10,000 pipes, it's the largest mechanical organ in the world. In fact, it took 10 years just to build the organ.

Building it was a major project

It stands to reason that a building of the size and scope of the Sydney Opera House would be a huge construction project, but at the time it was built, nobody really knew exactly how big. According to the Australian Government website, the original construction estimates stated that the project would cost $7 million and take around four years to build. In reality, the construction far exceeded expectations, and 16 years and $102 million later, the Sydney Opera House that you know and love today was opened to the public.

The Sydney Opera House is a magnet for tourists, travelers and fine arts aficionados alike. Playing host to 3,000 events every year, the Australian Government website reported that its many concert halls pack in a combined total of 2 million concertgoers every year. A popular tourist destination in its own right, some 200,000 people walk through its halls on guided tours annually. Visitors can take pride in the fact that they're sharing a spot with one of the favorite hangouts of royalty. The venue was officially opened by the Queen of England in 1972, and she's since made four trips Down Under to pay her respects.