Best Times of Year for an Alaska Cruise 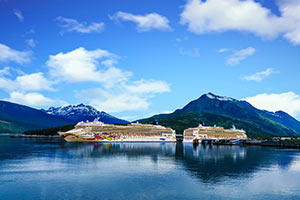 Over the past few years, Alaska has become one of the most popular cruise regions for U.S. travelers, ranking among the top three destinations worldwide, per a 2017 poll from Cruise Lines International Association. In 2018, the number of cruise ships sailing through the Gulf of Alaska increased by around 20 percent. But with so many options available it can be challenging to narrow them down and map out the perfect Alaska cruise.

If you're planning a trip to The Last Frontier, the first thing you should consider is the type of cruise experience you're looking for. While many of the state's most popular landmarks can be viewed by boat, such as Glacier Bay and the Hubbard Glacier, there are some locales that can only be accessed by land. Vacationers interested in shore excursions will want to book their vacation during Alaska's warmest months to ensure their mainland adventures are not impacted by seasonal rains or overcast skies. Understanding how the weather fluctuates from month to month can guide your travel arrangements and help you find the best time of year for your Alaska cruise.

When to book your Alaska cruise

The Alaska cruise season lasts for about five months, from mid-May to mid-September, though most travelers book trips for June and July to capitalize on the exceptional weather and extended daylight hours. These months are considered peak travel season for the cruise industry, so vacationers should expect to pay more during this time frame. Unlike most regions of the U.S., Alaska's summer months experience noticeable swings in temperature and rainfall, which can have an impact on your travel plans. Average highs for the Inside Passage region can range from 55 to 65 degrees Fahrenheit during most of the cruise season, with early May and late September averaging around 10 degree colder, USA Today reported. To help you select the best month for your Alaska cruise, let's take a closer look at how the weather, temperature and pricing differ throughout the season:

As cruises to Alaska continue to rise in popularity, it will become increasingly important to book your trip in advance. Spend some time looking over your Alaska vacation plans to see which summer months align with your travel goals and your budget.